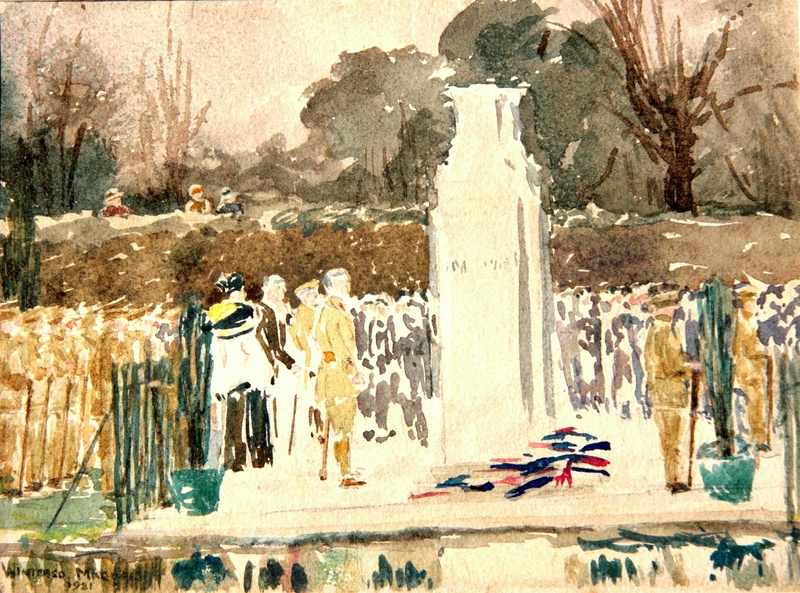 The unveiling of the war memorial, painted by Winifred Madder, whose brother Robert is one of the men commemorated.
Image copyright The London Borough of Sutton. With thanks to Honeywood Museum and Paul Williams.

Carshalton War Memorial was unveiled on March 13th 1921, with 237 names inscribed on it. It currently displays the names of 249 men; 243 of whom died in WW1,  4 in WW2, and 2 in conflicts since then. According to the local paper at the time, over 2,000 men (or in some cases boys) from the local area had enlisted during the war.

Of the 243 who died in WW1, the agesof 230 have been identified either by their entry on the Commonwealth War Graves Commission website, service record, Surrey Recruitment Register entry, census information, or extract from the register of births. It must be remembered, however, that their age may be out by 1 or even 2 years due to inconsistency in the information provided by these records.

Just under 10% were officers - the remainder were 'other ranks'. Over 60 different regiments and units are represented, from all branches of the services.

Whilst most of the men died on active service, some lost their lives through illness or accident. In a few cases the men died in the UK and several are buried in Carshalton (All Saints) churchyard.

Through the memorial one can trace the campaigns of the war, from the first battles of the British Expeditionary Force at Mons and Ypres, the landings at Gallipoli, and the naval battle of Jutland, to the German spring offensive of 1918 and the last ‘100 days’. The first day of the Somme is etched into our national conscience as a day of horrific losses for the British Army, so it is not surprising that 19 local men lost their lives on this day. In fact the Somme campaign from July-November accounts for nearly a quarter of all the names on the memorial.

The memorial highlights the effects of the war not only on a local level but also on individual families – there are several sets of brothers whose names appear. In one case the Brooks family lost three of their sons in just over one month in 1918.

The following account of the unveiling appeared in the Wallington & Carshalton Advertiser on Friday March 18th 1921:

“THEY DO NOT DIE WHO FALL IN FREEDOM’S NAME”

Carshalton’s memorial to men who fell in the Great War was unveiled and dedicated in the presence of a large crowd on Sunday afternoon.

The memorial takes the form of a tomb, the design of which is based on a fine 18th century example. This surmounts a simple base and platform, the whole composition forming a dignified monument free from any ornate features and depending for its effect entirely on its proportions and simple lines. It is of Portland stone, and has on each side panels containing the names of upwards of 200 men of Carshalton to whose sacrifice the memorial stands as a permanent record, and which is expressed in the quotation over each panel: “Their name liveth for evermore.”

With appropriate symbolism, the memorial has been placed on the banks of the Pond in the constantly moving waters of which it is reflected, A margin of stone flagged paving affords the public every opportunity of reading the names, and a raised platform is provided for flowers.

The memorial has been executed by Messrs. Burslem and Son, Tunbridge Wells, from the designs and under the supervision of Messrs. Bouchier, Tatchell and Galsworthy, architects, of London.

The unveiling was performed by Major-General Longley, officer commanding the Woolwich district, of which Carshalton forms a part, who was received by Major Lovelock (honorary secretary of the War Memorial Committee). His approach was signalled by a fanfare of trumpets by the buglers of the local Boy Scouts, whose colours were draped in black.

At each corner of the Cenotaph was a soldier standing with arms reversed, on the right was drawn up a contingent of the East Surrey Regiment from Kingston, and on the left was a party of Territorials from Sutton.

‘Major-General Longley,- on behalf of the Carshalton people I have to ask you to unveil our memorial to those men from the parish who died in the Great War. We are proud of the fact that the men of our village did not hesitate when they knew their country to be in danger, but proudly gathered together, rank on rank, to the number of nearly 1000 volunteers, in answer to the bugle call of war. In all Carshalton sent more than 2000 men to fight their country’s battles, and of all of those valiant hearts who hopefully marched away 237 never returned. Upon that rising ground across the water where now stands our Parish Church the first inhabitants of this village, barbarous in customs, pagan in their religion, raised a mound above the body of their dead chief. It was the first Carshalton memorial to a dead hero, and throughout the changes of time and the difference of faith that spot has always been and always will be hallowed ground.

Today in a brighter and happier belief in the future state we have raised another memorial to the dead heroes of this village. We cannot inter them here with the honour that is due to them. Peacefully their bodies lie upon the battlefields of three Continents, and we have here an empty tomb. But this spot will ever be sacred and always associated with grateful memories of those men who left their homes and loved ones, who laid aside their hopes and ambitions and cheerfully marched out into the great unknown.

The memorial is erected upon ground given by the Urban District Council for the purpose, and will be taken over by them and carefully tended.

I will now ask you, sir, to unveil this memorial and to reveal for all time the names of those Carshalton men who fought and died for their King and country’.

Major General Longley: - ‘I unveil this memorial in the honoured memory of the men of this place who gave their lives for their King and country in the Great War. Let us consider for a moment all that this implies. Let us think also of those whom it commemorates – what they did for us and our children, of how they died in the performance of duty to preserve the liberty and freedom of the world. When we reflect on the truth of the words inscribed on this memorial we shall lose some of our sadness and be tinged instead with a glow of pride and satisfaction that those who have been taken from us have added to the glory and power of the country and the freedom of the world.

They do not die who fall in freedom’s name

Their souls live on, a pure and holy flame.

This memorial will remind us who are living and those who come after us of the splendid sacrifices made by our brothers, fathers, and sons for the glory of the place they held so dear, and may we all be inspired by their noble example.’

Dedicatory prayers were then read by the Rector of Carshalton (the Rev. W.R.Corbould), after which Major Lovelock read a list of the names of the fallen. Three volleys were discharged by the firing party, and “The Last Post” and “Reveille” sounded by the buglers brought an impressive ceremony to a conclusion.

Representatives of the local branch of the National Federation of Discharged and Demobilised Sailors and Soldiers were present under Major Miller, D.C.M., and headed by two children, Allan and Ernest, the sons of the late Private Baker (East Surreys), who carried a wreath, which was placed on the Cenotaph on behalf of the federation. Mr. F.W.Bird headed a procession of war widows from the Wrythe carrying a large Union Jack surmounted with a laurel wreath, and a floral wreath, which was also placed at the foot of the memorial, while among others who placed their tributes were the Rev. J.E.Jasper and Couns. R.Brownsmith, J.P., and W.E.Davis.

Before and after the ceremony peals were rung on the bells of the Parish Church.

NAMES OF THE FALLEN

Appended is a list of the names of the fallen inscribed on the Cenotaph.  (NAMES) 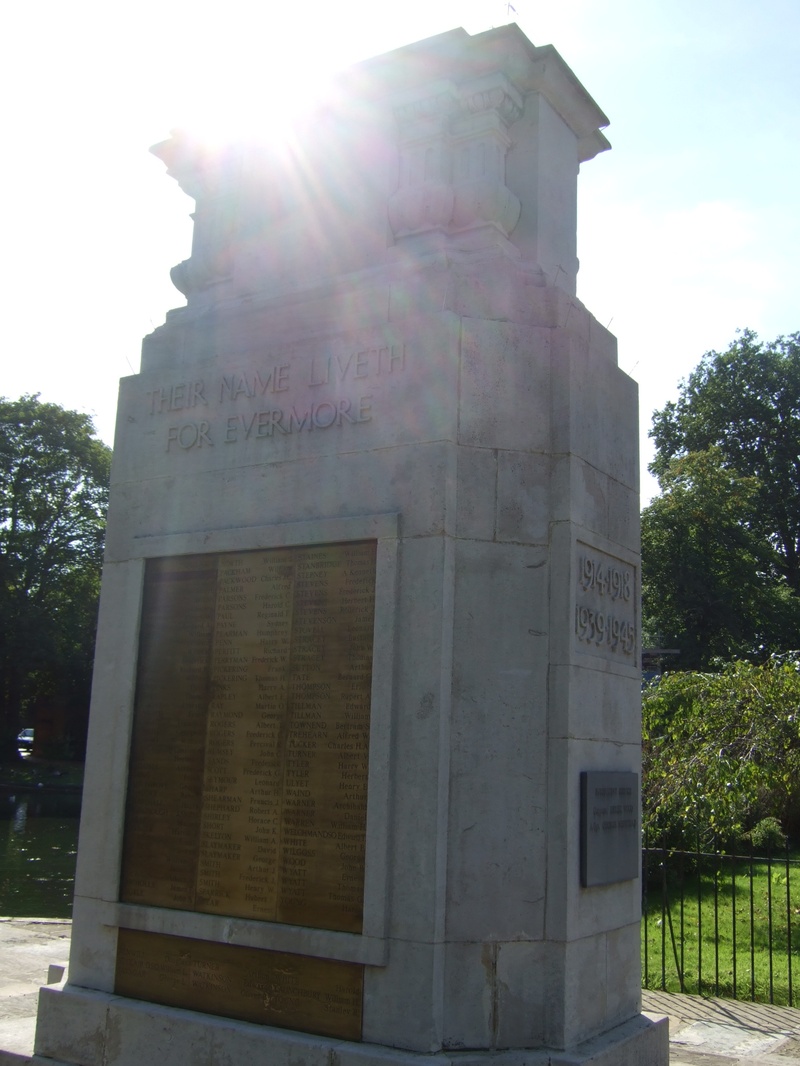 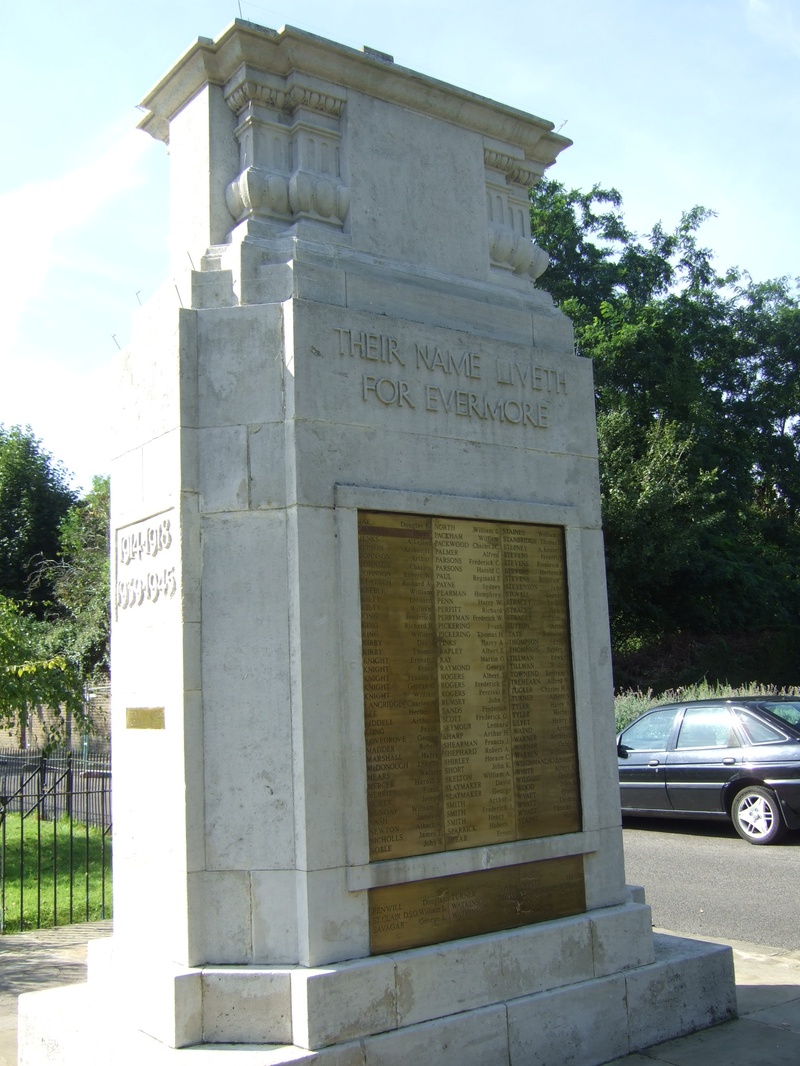