On Remembrance Day, 11th November 2014, I had the pleasure of visiting Carshalton Boys Sports College to talk to Year 9 students about Carshalton in the First World War. In addition, the whole school's curriculum for the day had been based around activities from the First World War, from translating war poems in languages classes to making trench periscopes in physics. At 11 o'clock all the pupils assembled in the playground and were silent for the Last Post. A memorial was unveiled, on which is written a poem penned by one of the students who had visited the battlefields. A full write up of the day can be seen on the BBC website here.

The school has been taking part in the government-funded programme to commemorate the centenary of the war, sending pupils from all schools to the battlefields and encouraging them to share their experiences when they return. The latest two students from Carshalton Boys have recently (April 2015) returned from their trip, and I am delighted to share their report below:

"Last month secondary schools from all over the local area came together to mourn those who fought for their country in World War One as part of the First World War Centenary Battlefields Tours programme run by the government. Cemeteries in France and Belgium were visited and family graves were discovered. Many pupils on the trip discovered that they had relatives who had fought in World War One, and some were even able to find their headstones. 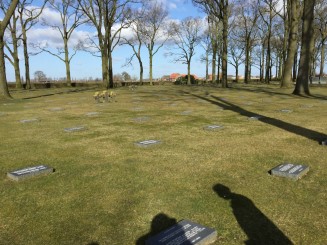 One cemetery that the pupils visited was the German cemetery of Langemark in Belgium. Unlike the other cemeteries, this cemetery had mass graves rather than singular graves. Also, the atmosphere in the cemetery was rather chilling as the gravestones are dark in colour (in contrast to the white of the Allied headstones) and the cemetery is dominated by numerous large oak trees, the national tree of Germany, which serve to give it a very sombre feel. As World War One saw devastation and damage experienced in France and Belgium on an unprecedented scale, it is of no surprise that Germany were not given a lot of land to bury their dead. Germany tried invading Belgium, despite their neutrality, as part of the Schlieffen Plan. This was the plan, devised in 1905, that Germany would invade France by attacking through neutral Belgium and then turn its attention towards Russia, who Germany believed would take longer to mobilise her forces. After taking Belgium in 1940 as part of the Nazi conquest of Europe during the Second World War, Adolf Hitler actually visited the cemetery to mourn his fellow comrades. It was a very sobering experience to visit this cemetery as it had such a different feel to the others that we visited. Although each cemetery is different - some are placed where battles were fought and some are placed in peaceful areas where the soldiers can rest in peace - we were pleased that we were given the opportunity to visit both Allied and German cemeteries as it gave us a thought provoking insight in to the scale of loss experienced by both sides during the First World War.

The Last Post Ceremony at the Menin Gate was an amazing experience. This is the ceremony that is performed in Ypres, Belgium, every night for a soldier who died defending the town of Ypres during the First World War. The ceremony allowed us to realise just how many men fought for their country and had their lives taken from them at such a young age. When we reflected, we realised that there are two aspects to war. The honour and the horror. On one side, men fought for their country and are remembered forever because of this. However, on the other side, thousands of men died for a reason that can be caught up and forgotten throughout the course of the war. 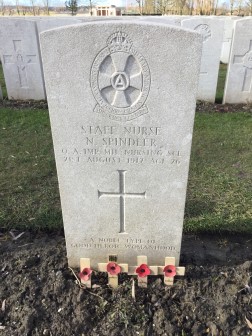 One of the graves we visited,at Lijssenthoek Cemetery, was that of Nellie Spindler who was one of two women to buried in Belgium. Nellie Spindler was a qualified nurse in the Queen Alexandra’s Imperial Military Nursing Service on the Western Front. During the first three weeks of the Third Battle of Ypres, August 1917, Nurse Spindler served with the 44th Casualty Clearing Station, or the CCS. German artillery hit the station on 21st August 1917 wounding Nellie Spindler which resulted in her later death. At her burial, four generals and over one hundred officers attended. We thought this was a moving site to visit on our tour of the battlefields of the Western Front, as it reminded us that it was not only front line soldiers who risked their lives during the war, but that men and women from all different backgrounds made the ultimate sacrifice.

Carshalton Boys Sports College wishes to thank all the staff on the First World War Centenary Battlefields Tours programme as well as the people from the lodge that we stayed at in Belgium whilst we were away. We would also like to thank the government for giving us this experience and changing the way we view the war and we hope that by writing this piece and telling people about our experience on the trip, that we do our bit to ensure that the legacy of the First World War lives on."