Soldiers of the Carshalton War Memorial

I am no longer updating the biographical details of the men on this website, but I do however have substantially more information than is available here. If you have any information about the men on the memorial or want to know more about any of them, please contact me.

And please also visit my blog for articles and book reviews about the First World War.

BOOK SIGNING! - I will be at Honeywood museum's 'Bookfest' on Saturday 7th May 2016 signing copies of my book. Further details here.

TALK - St. Nicholas church, Sutton, on Wednesday 22nd June, where I will be talking about the Somme campaign and some of the local men who were casualties. Details below. 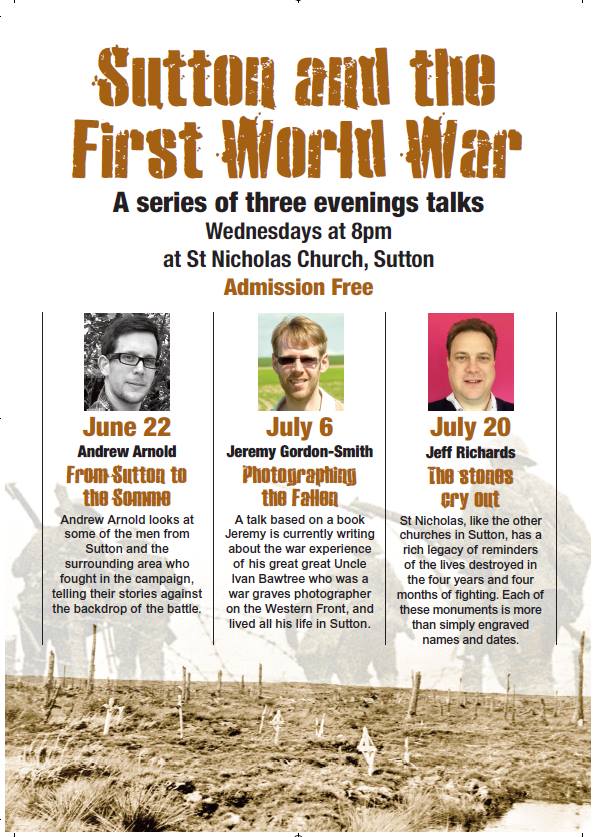 MAPPING CARSHALTON'S CASUALTIES - I have created a map showing where the men on the memorial lived in the local area. The map can be viewed here

My book about the men commemorated on Carshalton war memorial, Their Name Liveth for Evermore: Carshalton?s First World War Roll of Honour, has been published by The History Press.

In the words of the blurb on the back: ?Carshalton in Surrey was deeply affected by the First World War: over 1,900 local men enlisted to fight. Of those men, 243 lost their lives and are commemorated on the war memorial. As we find ourselves commemorating the centenary of the war, it is more important than ever that these men are not forgotten. Drawing on over six years of research, this book brings together the stories of the lives ? and deaths ? of these men. Utilising a wide variety of sources and complemented by many previously unseen photographs, their stories are told here, from the fourteen sets of brothers who were killed to the devastating effect of the Somme campaign in which 19 local men lost their lives on the opening day alone."

It has been an incredible and often moving journey researching the men and their stories over the last few years. If you do read the book, I hope you enjoy it and think it is a fitting tribute to the men.

The book is available from Waterstones and WH Smith in Sutton, Honeywood Museum in Carshalton, and the following online outlets: 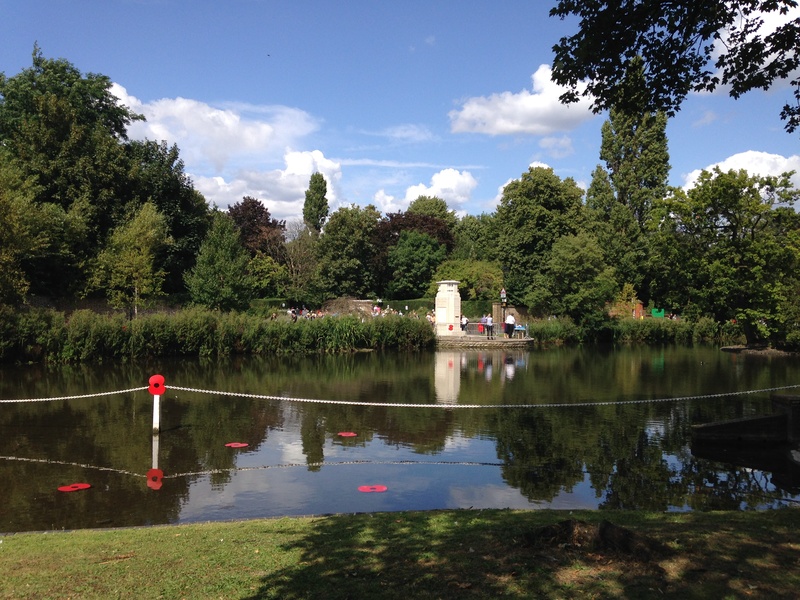 Yesterday marked the dedication of Carshalton?s new Second World War memorial as well as a commemoration to mark the outbreak of the First World War. It has taken over five years for the Second World War memorial to be approved, funded and designed. My own part was relatively small, assisting the staff of the Local Studies & Archives Centre to produce the list of names for inclusion on the memorial. A huge amount of thanks must go to the local councillors, ward council group, Local Studies Centre, and local residents, for persevering and seeing the project through to fruition.

The turnout yesterday was impressive. Crowds filled the Garden of Remembrance and the area around the First World War memorial and Honeywood Walk. In an echo of the only known photograph of the unveiling of the original memorial in 1921, there was also a throng of people on the far side of the ponds and by the Greyhound pub. Some of the photos of the men that I have uncovered during my research were posted around the Garden of Remembrance; how appropriate for them to bear witnesses to the proceedings. 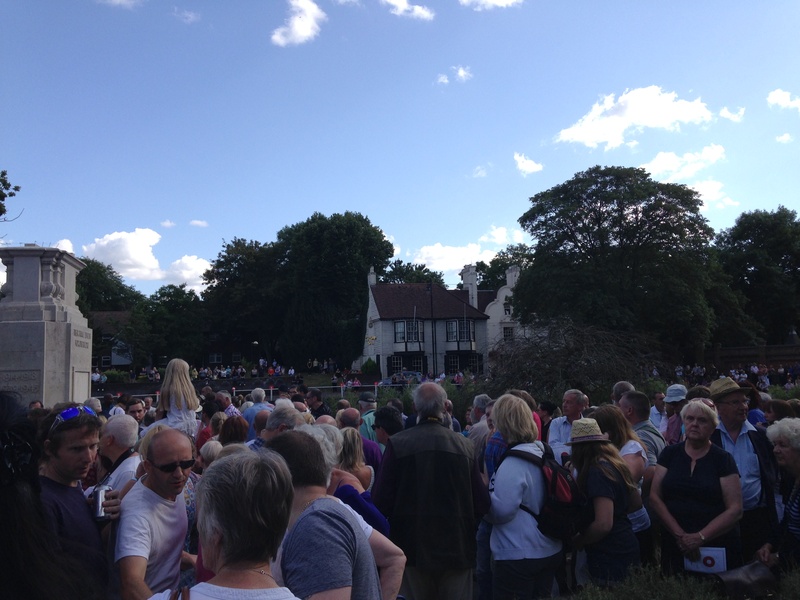 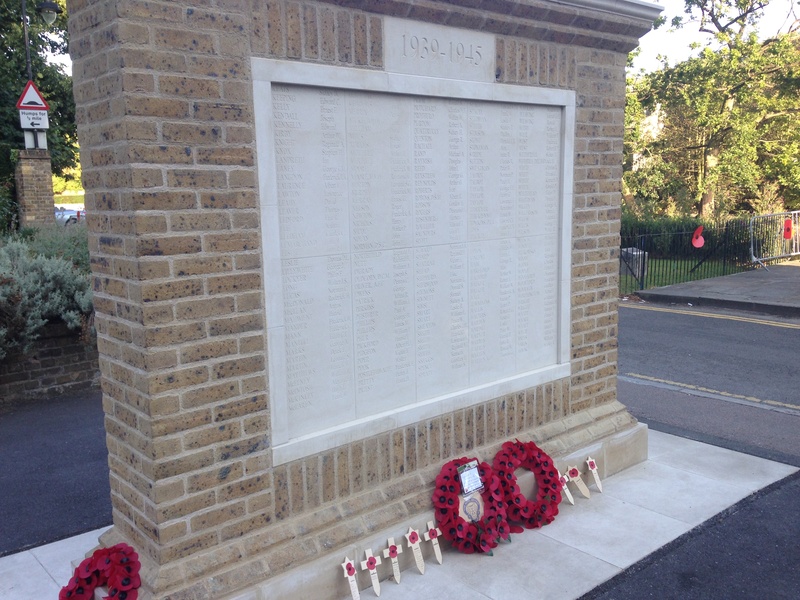 The format of the event struck the right balance I think. There was no emphasis on religion or victory. Instead the message was one of remembrance, sacrifice, and of a community impacted heavily by both world wars. I had the honour of being part of the wreath-laying party comprised of community group representatives. Local councillors as well as descendants of one of the soldiers and the Royal British Legion also laid wreaths. There were poetry readings, some music from the Sea Cadets, and performances by Sutton Chorale. The sounding of the Last Post heralded a minute?s silence, the sound of the traffic the only intrusion on personal reflection. After the ceremony everyone was invited to cast a poppy into the pond to remember a loved one, or lay a cross at the base of one of the memorials.

A reception at Honeywood museum followed and I was able to take a look at their new exhibition about the war (for more details see here). It is very well done, with informative wall panels and some very interesting artefacts on display. I would highly recommend a visit if you are able to get there. I also had the opportunity to speak to several relatives of the men on the memorials, some of whom I have met before and others whom I have only been in touch with via email. All agreed that the day had been a fitting tribute to their relatives.

After the reception I strolled back to the memorial. Devoid of the crowds it was a more peaceful moment. As the sun set the hundreds of poppies floated peacefully on the ponds, each one carrying a memory and thought for those who lost their lives. 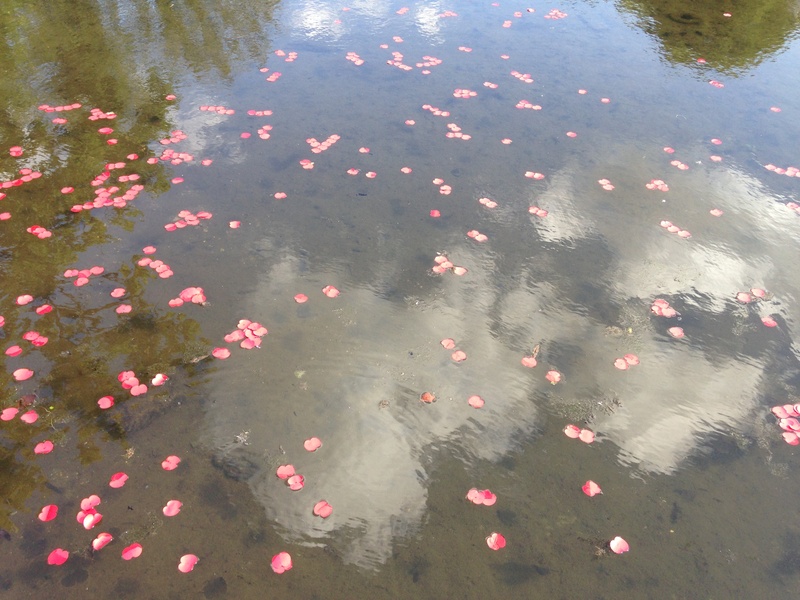 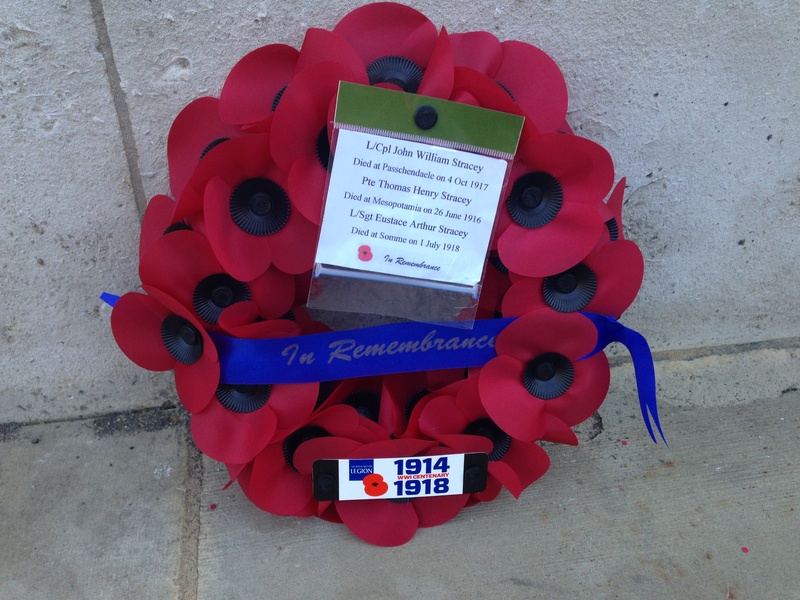 The event went very well, testament to the hard work and organisation of those involved. We are faced by four years of centenary events and commemorations, but if the interest shown by local people yesterday is anything to go by then I am sure that the Carshalton community will ensure that ?Their Name Liveth Forevermore.? 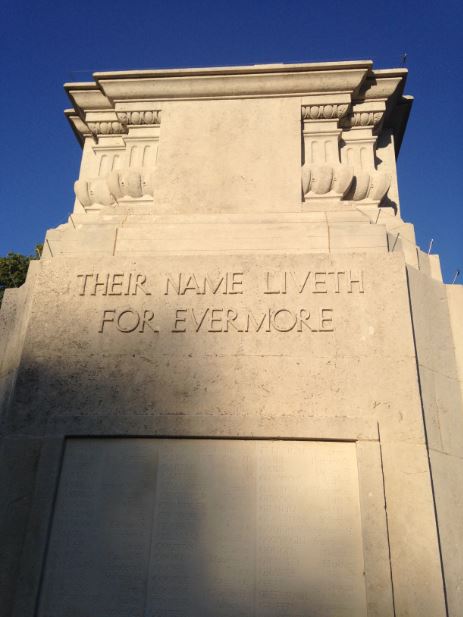 Further write ups of the event can be found on the following websites: 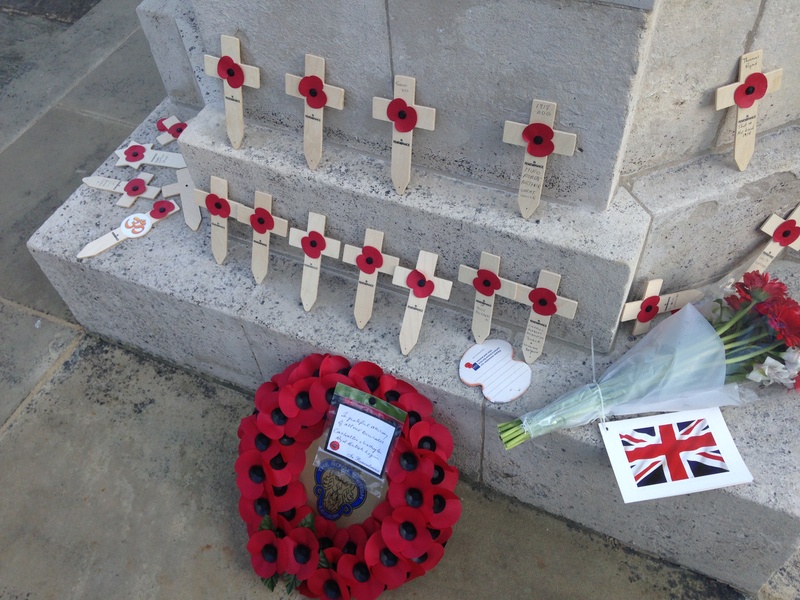 3rd April 2014: Well the draft manuscript of my book has finally been submitted to the publisher! The provisional publication date is 1st October 2014.

2nd March 2013: I have written an article for 'Centenary News' about my research into the men on the memorial. To read the article, click here.

18th February 2013: Last week the BBC aired a documentary about the problem of metal theft. The theft of the Carshalton plaques is briefly mentioned, and a descendant of one of the men named on the memorial is interviewed. The documentary can be watched on iplayer here; the piece about the memorial starts at 26m 15s.

28th September 2012: I recently had the pleasure of reuniting a First World War 'memorial plaque' with descendants of the soldier it commemorates, Gunner Harry Oliver Wayman. Harry is commemorated on Sutton war memorial and the memorial at Sutton Grammar School - a picture of the memorial can be seen on the Other Memorials page. The story is covered in this week's Sutton Guardian.

7th February 2012: The replacement stone plaques, costing £21,000 and funded by a local scrap metal dealer, were unveiled this morning at a well attended ceremony. 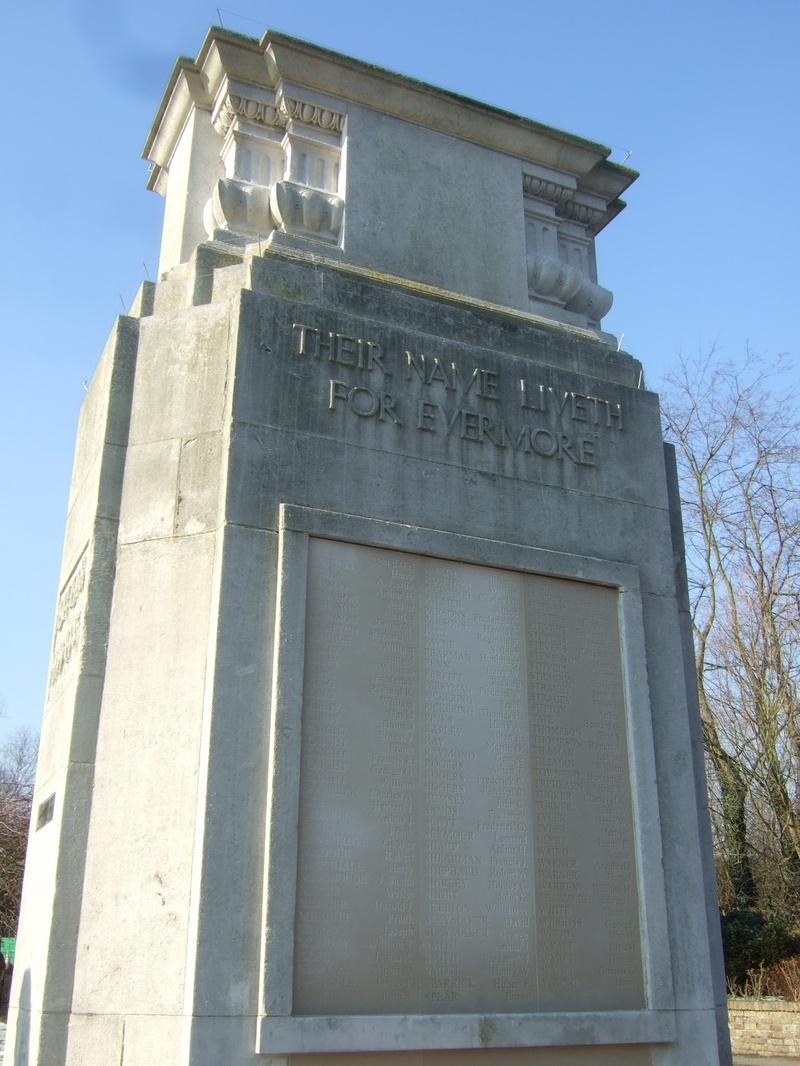 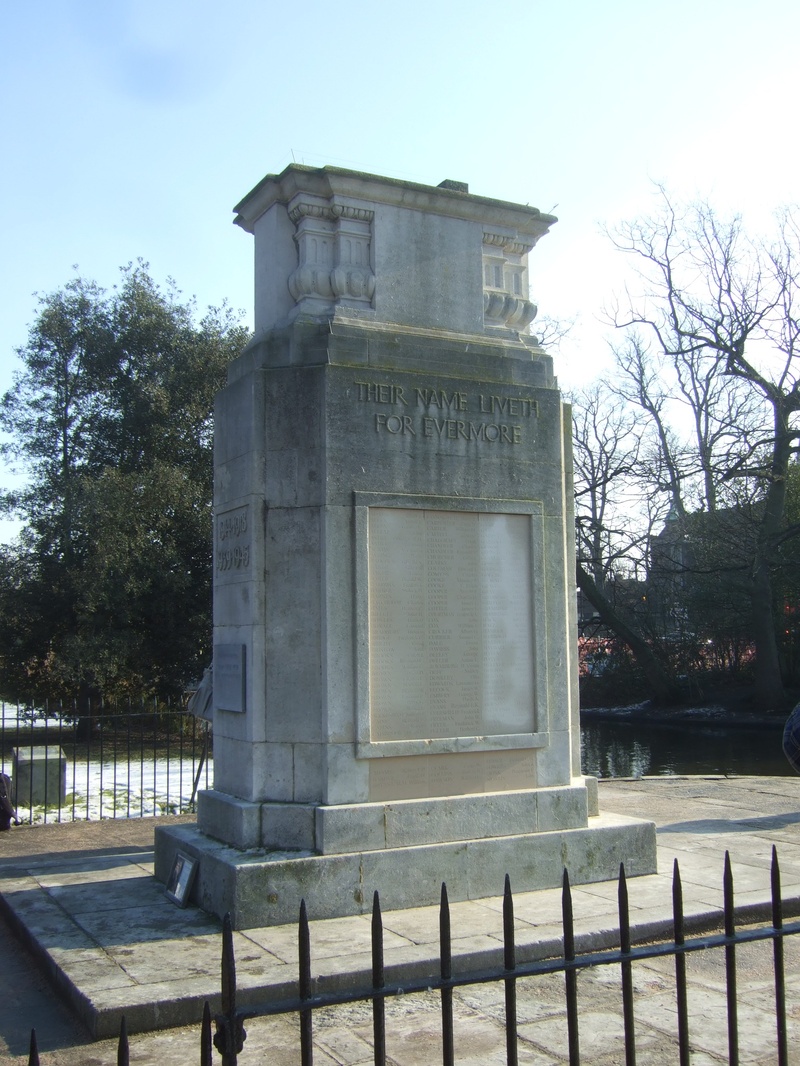 There has been extensive media coverage of the event:

20th November 2011: An epetition is calling on the government to change the law around purchasing scrap metal. Sign the petition here.

14th November 2011: Since the plaques were stolen the memorial has been getting a lot of media attention. Although this is likely to quieten down now Remembrance Day has passed, hopefully it has raised the profile of memorials being vandalised and plaques stolen. It will be interesting to see whether any changes to the law are introduced as a result of the various campaigns. Some links to recent news stories about Carshalton war memorial are posted below:

10th November 2011: Temporary plaques are being installed today for the Remembrance service on Sunday. For further information see the council's press release.

1st November 2011: The theft of the plaques has made the BBC News.

26th October 2011: The council have announced that the stolen plaques will be replaced with new ones made from stone. Temporary plaques will also be in place in time for the service on Remembrance Sunday. For full details see here.

30th September 2011: I have been informed by the council that the panels on the war memorial were stolen sometime on the 28th/29th September, no doubt by thieves who want to sell them as scrap metal. The police have been informed; if anyone knows of the whereabouts of the panels please contact them as soon as possible. A thoughtless and despicable act, particularly so close to Remembrance Day. 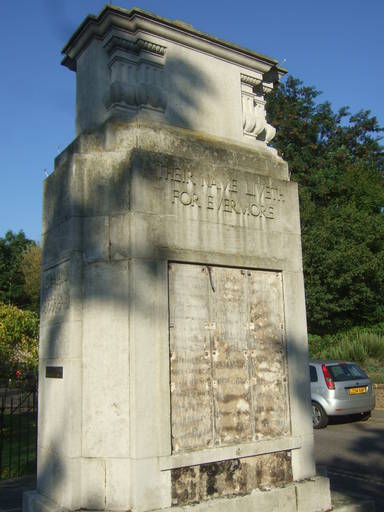